The Eyes Have It

After a night like Thursday, we can’t help but look around and marvel. 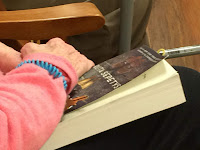 Salt to the Sea by Ruta Sepetys, the All In! 2019 book, is set in 1945. While that feels like ancient history to our middle schoolers, there are folks just down the road who experienced World War Two first hand. We'd reached out to a local assisted living facility when we read Unbroken, and the time felt right to do so again. We suggested Salt to the Sea for their monthly book club, and asked if they'd be willing to share their discussion with some 12 year-olds. Stunned that youngsters would read such a serious book, they said yes.


Last Thursday was THE night. Gathered around cookies and warm apple cider, our hosts talked about rations and blackout curtains, about fears and worried parents. They shared memories of beach patrols and Pearl Harbor and FDR speeches on the radio. (No TV! Just imagine that!) Despite a 70-year age difference, readers were united in their love for the Shoe Poet and in their disdain for Alfred. Names like Hitler, Stalin, Leningrad, and Lithuania rolled off the tongues of twelve year-olds. Adult jaws dropped as children spoke intelligently about naval disasters and the expense of mounting a recovery effort. We debated whether one decision could truly change someone's life and if morals were fixed or flexible. As ambassadors for the unseen awesomeness that is Middle School, Mary and Erin couldn't have been happier.  Our kids interacted with octogenarians with ease, because they were all readers. That night we bridged the generation gap, and it was all because of a book.

The conversation in full swing, Erin posed a question about the author's use of children in the novel, and Mary slipped over to her laptop. No one paid much attention; we had purposely left the screen on so the audience would become desensitized to its presence. Mary clicked a few buttons and the Skype home screen appeared. The speakers gave us away; that Skype dial tone is LOUD! All eyes turned to the bed sheet draped over a closet door, and then one child read the name: "Ruta Sepetys." "RUTA SEPETYS?!" "Wait, what!?!" "Oh my gosh, are you kidding?"


And there she was, a thousand miles away, smiling and reaching out her arms for a virtual hug.

It’s no secret that Ruta Sepetys is our favorite. You meet her, you love her and that’s that. There’s something about her that is so genuine, so full of love and sincerity that you feel like you could sit and talk for hours. (And it’s our goal to do that very thing. Seriously. Our dream is to find a way to be CRLs who hang out with Ruta Sepetys full-time. We’d wear matching t-shirts and form a literacy justice league. There it is. Out in the universe!)

She lit up the room and filled every heart. She acted as if there was nowhere else in the world she'd rather be. If you’ve ever wondered what magic looks like, look into the eyes of a child who is being heard by her favorite author. Ruta shared secrets and answered every question. She validated and encouraged and connected. She made every person in the room feel valued and special.

On Thursday night we lost ourselves in the marvel of it all and watched our kids watch her. In their faces we could see the thrill, the joy, the awe. We watched their hands, clutched together in nervous anticipation as they approached the screen for their moment. We saw their smiles - wide as could be - as they listened to her speak to them, as they thanked her, as they turned away and returned to their seats. Their faces mirrored our own.

Ruta stayed on the screen until every child who wanted to ask a question had asked - a full ten minutes longer than we'd asked of her - and then it was time to say goodbye. Everyone waved and clapped and headed out into the chilly New England night with a smile on their face. Well, ALMOST everyone.

Mary's son Vinnie is in 6th grade now, and he joined us Thursday night for his first official "All In!" experience.  Literary shenanigans are nothing new to Vinnie; he's been an honorary participant as far back as 2013, when he fell in love with The Hobbit.  He's been enjoying Salt to the Sea, but he'd far rather spend his evening playing FortNight than talking about books with a bunch of strangers.  So it was with quite a bit of grumbling that he agreed to come along for the evening.  He arrived with his mom early, as usual, and eyed the cookie tray while he helped two Crazy Reading Ladies set up the activity room.  As he distributed pens and candies, Mary casually called him over. "Hey Vin, come sit next to me." When Ruta's face appeared on the screen for our test call, Vinnie lost his breath. He had a private audience with his favorite author.  The smile!  He chatted happily with her, even performing his best Alfred impersonation, and then solemnly swore to secrecy as the plan was laid for reconnecting later in the evening.  When "later" came and Ruta answered student questions, Vin leaned up against his mom and said, "Thank you for forcing me to come."

So why is it that we're hinting that Vinnie didn't leave with a smile on his face?  As the families headed out and the crumbs were dusted off the table, Mary noticed Vin sitting quietly by the computer.  She gathered up his coat and hat and said, "Come on, bud. We're ready to go." He looked at her with the most sincere confusion and asked, "But aren't we calling back to say goodbye?"

And we think that's pretty marvelous.