My daughter Anna was in 4th grade the year I put corkscrew curls in my hair, spray painted them pink, and wished 220+ middle school students "Happy Hunger Games! "  I attended her 5th grade conference dressed as an elven princess from THE HOBBIT.  Having modeled that level of passion for two years, there was no way I could dissuade her from reading DIVERGENT when she officially joined All In! in 6th grade.  Was I concerned about the content?  Yeah, I was.  This is, after all, the girl who didn't know what a commercial was until 2nd grade because I'd only ever allowed PBS.  It was Colleen, a friend and colleague and mother to two well-adjusted teenaged children, who reminded me that 11 year-olds are capable of discerning the difference between fantasy and reality.  Those words rang true a month later when Anna reacted to Edward's ocular encounter with a butter knife with the word "gross," but found her climbing into my bed after a 2am nightmare sparked by a Rachel's Challenge assembly about the massacre at Columbine.  Fantasy vs. Reality.

People who know The Crazy Reading Ladies are somewhat surprised when they hear that we are embracing a YA adaptation of an adult book for our 2015 All In! program.  We are, after all, champions of complex text and challenge.  We put Tolkien in the hands of 6th graders and vehemently defended the decision to any naysayer.  We stirred the proverbial pot in our school district by using this very blog to publicly disagree with the disturbingly common objection that there are kids who "can't" read well enough to participate.

Are we caving to the pressure from a handful of parents who complain that our choices have been inappropriate?  No.  We have and will always support a parent's decision to say no to their child, but we will not force that no upon an entire school population.

Are we choosing the YA version for the simplified vocabulary and sentence structure to make it more accessible for the kids who "can't" read the original.  Um...hell no.

What it all comes down to is the very same observation that Colleen made to me in the staff lunch room one year ago:  11 year-olds know the difference between fiction and reality.  And this year's book, UNBROKEN by Laura Hillenbrand, is reality. 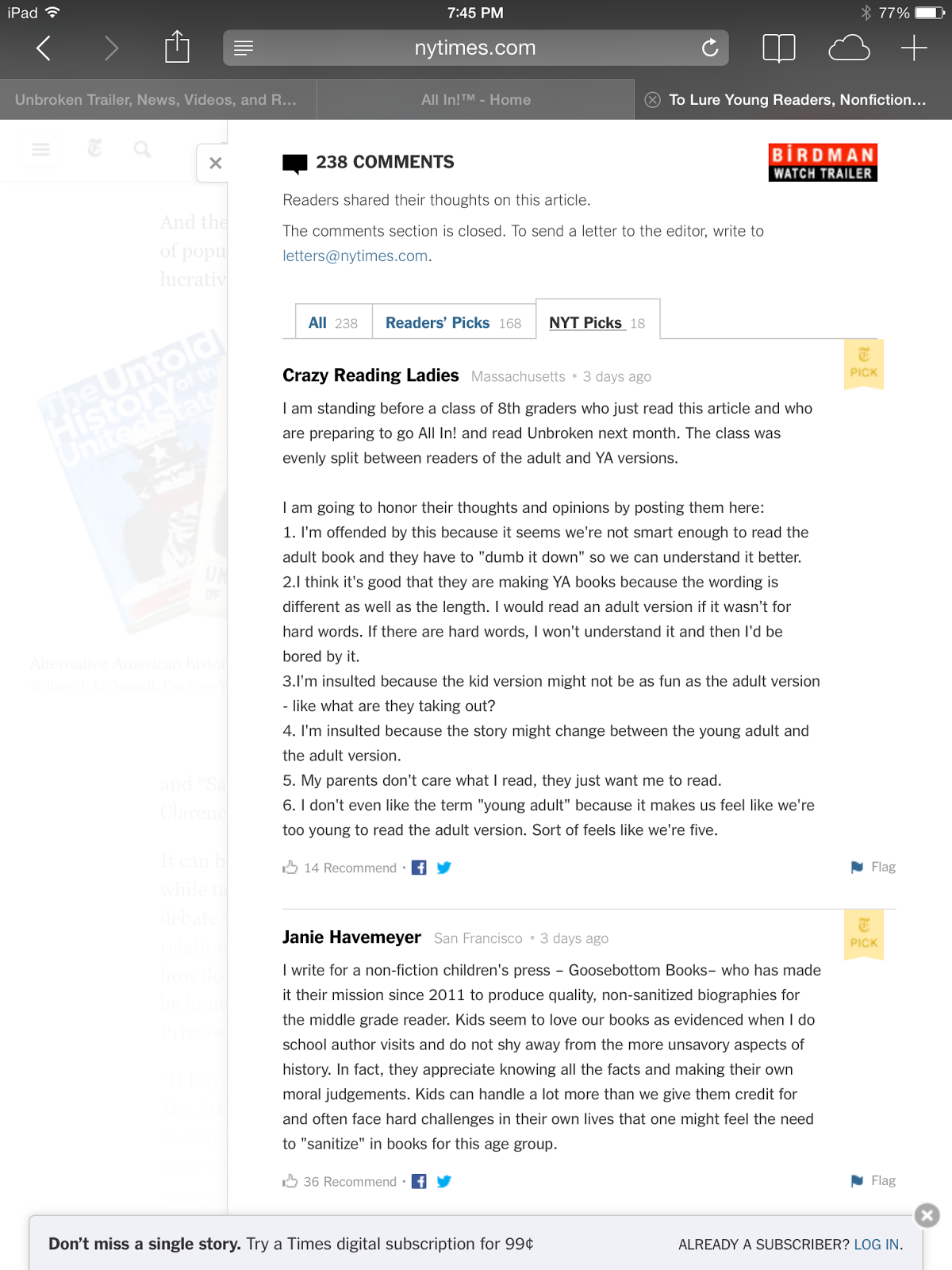 Recently The New York Times published an article on the increasing trend of retrofitting non-fiction books for the Young Adult market. The piece explored several books undergoing the transformation and spoke specifically about Laura Hillenbrand's upcoming YA adaptation of UNBROKEN.  Erin shared the NYT article with the students of her 8th grade replacement literacy classes (translation: support classes for struggling readers) and reported that half of her kids felt "insulted" by the insinuation that they can't read the original book and admitted that reading the YA version would "feel like cheating."  The other 50% were excited that a book on such an interesting topic would be accessible to them; they would be more likely to read it. The comments Erin posted on behalf of her kids became a "NYT Top Pick."

The thoughts of Erin's students were echoed by the majority of people posting comments.  We're doing our youth a disservice by taking a rich text and dumbing it down.  We're raising a generation of sissies by sugar coating life.

The Crazy Reading Ladies would like to officially go on record with the following:

We did not choose the YA version of UNBROKEN because we do not believe our students are capable of reading and understanding the adult version.

We chose the YA version of UNBROKEN because the story is not a story.  It's non-fiction.

Allow me to set up a metaphor to make my final point.  When teaching my students about critical reading, I compare the activity of reading to that of sailing on the ocean.  You can read a text on the surface, just like you can sail on the surface of the water.  You see things, you feel things, and those things are interesting and
real.  But if you were to strap on some SCUBA gear and dive beneath the surface of the water and the text, you'd see a whole lot more and it would likely be a whole lot more interesting.

I go back to Anna and her tears at 2am after learning the ugly truth about school shootings. As a teacher, I want her to read well-written, challenging material.  As a mother, I want her to experience life through literature and learn all she can.  As both, I want her to maintain her youthful trust in the world for as long as I can possibly manage it.  And it is for this reason that I ended up casting my vote for the YA version.  The YA version is enough to give her a sense of war, it's cruelty and injustice, and enough for her to question exactly how people could treat each other so poorly.

In other words, I think that it's enough for her to snorkel through the world of the Pacific theater of WWII.  She doesn't need to don SCUBA gear and immerse herself in it.  There will be plenty of time for that when she's older.

Mary
@allincotillo
Posted by Mary and Erin at 6:38 AM No comments:

Unbroken: The Right Book at the Right Time

Welcome to the CRL Version 2.0.

For three years we've stuck to a familiar playbook and enjoyed fabulous results.

1. Choose a popular young adult novel with a movie adaptation in the works
2. Tease the heck out of it
3. Reveal the title with pomp and glitter cannons
4. Quiz readers and celebrate accomplishments
5. Fill the buses and see the movie
6. Engage in literary silliness

That was then, CRL beta.

It's safe to say we're doing things a little differently this year. 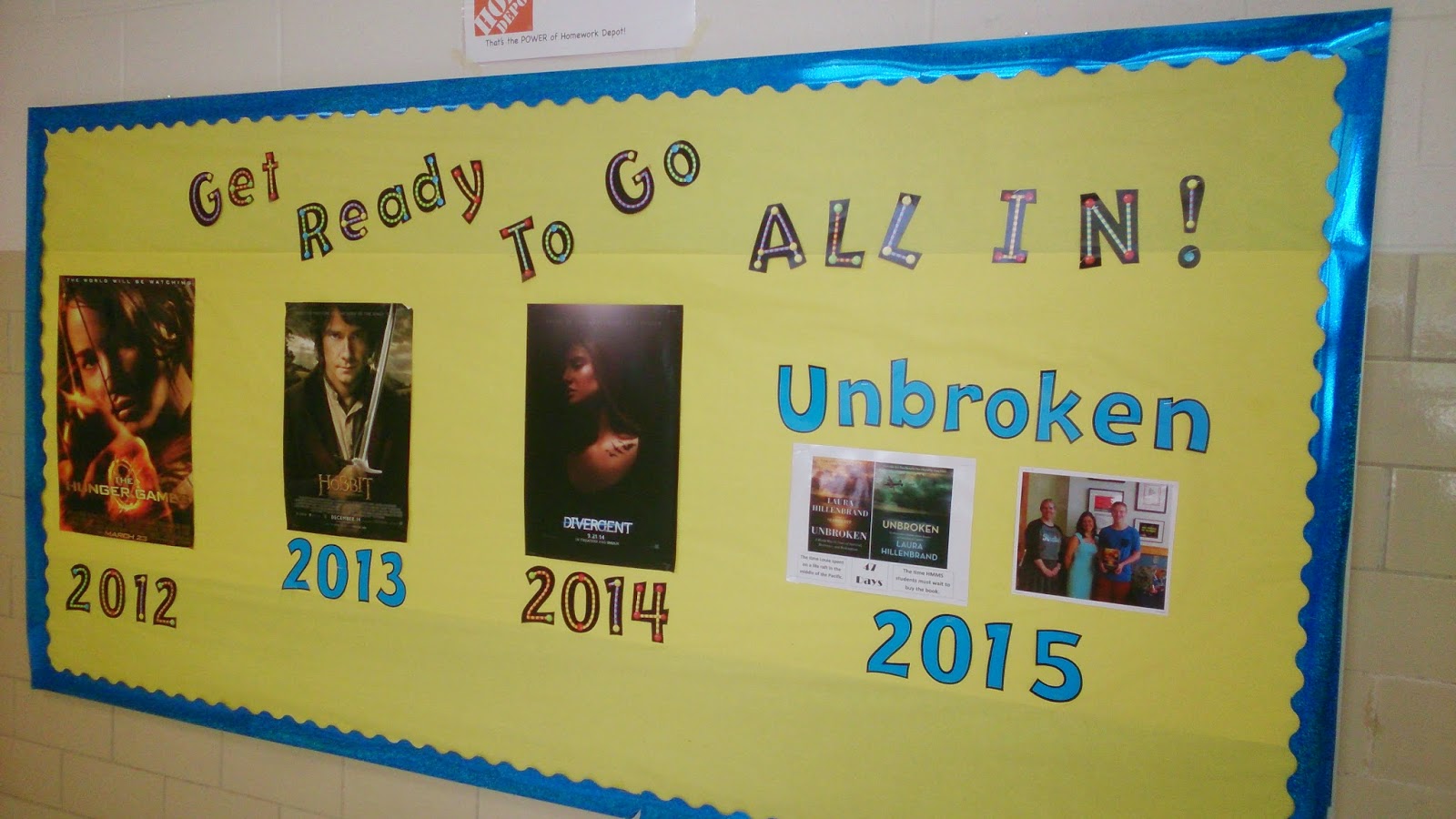 Why?  It's not because we planned it that way, not because we were bored and wanted to spice things up a bit, not because parents or staff complained, not because we bought in to Common Core.  We are changing things because  All In! has always, always been about the book, and this year we are honoring our truth by going about things a little differently.

By now, most people in the country have read or heard rave reviews about Laura Hillenbrand's Unbroken: A World War II Story of Survival, Resilience, and Redemption.  Most people are also aware that the female half of Brangelina produced what is rumored to be an Oscar worthy feature film based on the book.

But how many people know that there is a YA version hitting shelves on Veterans Day, November 11th?

﻿
The Crazy Reading Ladies know, and we recognize lightning in a bottle when we see it.

This book is so different from anything we've done before that we've scrapped the old play book, hired a new offensive coordinator, and have our sights set on a winning season.